We have talked a fair amount about antibodies, and much of the SARS-CoV-2 discussion is focused on antibodies as indicators, treatments, or vaccines. However, antibodies produced by B-cells are only one part of the larger immune picture, albeit one of the most accessible parts. To develop a comprehensive treatment strategy for SARS-CoV-2, we will likely need to understand how the broader network of immune cells responds to the virus. Today, we’ll take a closer look at the T cell response to SARS-CoV-2 infection, and what it says about long-term immunity.

A brief refresher: T cells, you may remember, are adaptive immune cells. Each T cell has a unique T cell receptor that recognizes a different set of foreign peptides, and if a T cell’s receptor is activated, that T cell clones itself and produces an army of similar T cells capable of fighting off the invader that was recognized. T cells come in several varieties, the two most prominent of which are CD4+ T cells and CD8+ T cells. CD4+ T cells are responsible for surveying peptides (that is, short protein fragments) presented by antigen-presenting cells like B cells and macrophages and starting a signaling cascade that activates the rest of the immune system, and are thus referred to as “helper” T cells. CD8+ T cells survey peptides presented by normal tissue cells throughout the body, and, if they recognize one of the presented peptides as foreign, they kill the cell under the assumption that it has been infected. CD8+ T cells are thus called “killer” T cells.

Given these critical roles in immune system activation, scientists are studying the extent to which CD4+ and CD8+ T cells recognize peptides from SARS-CoV-2. In one recent paper, Grifoni et al. created pools of peptides that tile the entire set of proteins that make up SARS-CoV-2. In one pool, they created a peptide for every set of 15 amino acids from the Spike protein, tiled such that each length-15 chain overlapped by ten amino acids with the next peptide in the pool. In another pool, they computationally predicted which peptides would be efficiently held by antigen presenting cells like macrophages, and made peptides that covered the rest of the SARS-CoV-2 proteins. A similar pool was made for the peptides predicted to be efficiently held in the MHC class I molecules that CD8+ T cells recognize. 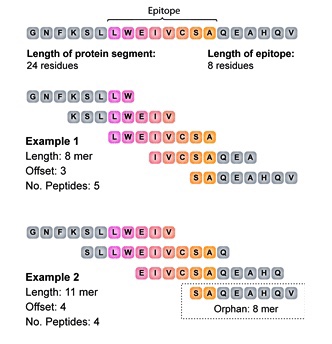 Scientists regularly create overlapping peptides that tile proteins of interest when studying which pieces of a protein immune cells recognize. This is a generic example showing overlap strategies from Mimotopes.com, a company that creates and sells custom peptides.

To test out the effects of these peptide pools, the researchers collected blood from patients who tested positive for COVID-19 but were not hospitalized, 20 - 35 days after symptom onset. The researchers extracted the Peripheral Mononuclear Blood Cells (PBMCs) from the blood, as these include circulating T cells and other immune cells, and then ran a series of experiments to see how the T cells responded to the peptide pools. The number of patients was small (20 patients exposed to SARS-CoV-2, and 20 unexposed controls), but even so, the results were consistent: all recovered COVID-19 patients showed evidence of a robust T cell response to SARS-CoV-2 peptides. 100% of patients had CD4+ T cells that recognized and became activated in response to peptides from the Spike pool as well as peptides from the non-Spike peptide pool. These activated cells were able to produce inflammatory cytokines (immune signaling molecules) and to quickly clone themselves. The response of the patients’ CD8+ T cells was less universal, but still robust: 70% of patients had CD8+ T cells that were activated in response to the SARS-CoV-2 peptide pools.

Memories of infections past

What does this T cell response mean? For starters, it indicates that recovered COVID-19 patients have a stronghold of “memory” T cells— T cells that have seen SARS-CoV-2 and learned its patterns so that they are ready to respond more quickly in the future. It’s unclear whether these T cells are able to confer long-term immunity for the patients, but there is some evidence that they might: another paper published by Le Bert et al. ran a similar set of peptide/T cell experiments, but they were able to include a set of long-recovered SARS-CoV-1 patients. They found that even after 17 years, these patients had T cells that were able to quickly respond to both SARS-CoV-1 and SARS-CoV-2 peptides, which gives us hope that T cell memory of SARS-CoV-2 will be similarly long-lived.

These cross-reactive T cells were not limited to SARS-CoV-1 patients, either. Both Grifoni et al. and Le Bert et al. used PBMCs drawn from donors without any exposure to COVID as controls, but these unexposed controls proved more interesting than the “zero baseline” we might have expected, as up to 50% of the unexposed controls showed some degree of reactivity to peptides from SARS-CoV-2, though these reactions were skewed toward the non-spike peptide pools. The researchers reason this is likely due to previous exposure to coronaviruses that cause common colds, and indeed, all unexposed controls had antibodies for two common coronaviruses, HCoV-OC43 and HCoV-NL63. If true, this cross-reactivity between common cold coronaviruses and SARS-CoV-2 could explain some of the variability in severity of COVID-19 across different people; some immune systems may already be primed to react to SARS-CoV-2 by prior infections. Further, given that the cross-reactive responses were more pronounced for non-spike proteins, this finding lends support to the idea that we should have a multi-target approach to vaccination and treatment, rather than a Spike-only approach.

(We should pause for a moment here to address a nagging question: wait, if even the unexposed controls showed responses to SARS-CoV-2 peptides, how do we know any of these responses are real? Isn’t the whole idea of a control to give a baseline to compare to? There are several reasons to believe these results are legitimate: peptide assays are fairly robust in immunological studies; the amplitude and targets of the control response are distinct from the COVID-19-exposed response; and multiple studies from multiple labs found the same results with the same peculiarities. That said, the sample size is very small, and the lack of a non-reactive control should always be concerning, so more studies in this area should be conducted before we draw any strong conclusions here.)

Taken all together, these T cell experiments demonstrate that, well, T cells matter, too. A robust immune response requires many cells, and the evidence of consistent T cell activation in recovered patients indicates that T cells play an important role in the natural clearance of the virus. It stands to reason, then, that an effective vaccination strategy will likely have to consider how and when to activate T cells. These studies identify a number of distinct peptides that activate T cells across patients, and could therefore be used along with antibodies as part of a vaccination strategy.