You may recall from our last post that innate immunity refers to the protective systems that organisms have developed that don’t require the organism to have seen a pathogen to respond to it. In this post, we’ll dive a little deeper into what innate immunity looks like in humans, focusing on some of my favorite innate immune cells.

Macrophages are the street-sweepers of the body; they clean up dead cell detritus, foreign particles, and aberrant cells like cancer cells that lack markers of happy, healthy cells. The name macrophage means “large eater” in Greek, and that is an appropriate description, as this cleaning happens when macrophages engulf suspicious particles and break them down inside the cell.

The routine cleaning that macrophages do also plays a critical role in surveilling for and rallying the immune system against foreign invaders. When a macrophage ingests a pathogen or pieces of a pathogen-- for example, a viral particle-- it breaks down the proteins into small fragments and presents those in special complexes on the surface of the macrophage. The complex is called an MHC class II complex, and you can think of it as a little hand on the outside of the cell, holding out a captured protein fragment. T cells from the adaptive immune system scan these MHC class II complexes, and if the presented protein fragment matches the T cell’s receptor (more on that next time), the T cell becomes activated and releases inflammatory chemicals that signal to the rest of the immune system, “I have found a foreign particle! Attack!” We sometimes use the metaphor of a “lock and key”-- the combination of the MHC class II complex and the protein fragment are a “key” with a particular shape, and if they fit into the “lock” (T cell receptor), an entire signaling cascade is triggered, and the adaptive immune response is rallied against the owners of the offending proteins.

This role in initiating adaptive immune responses proves critical to successful defense against pathogens, and genetic mutations that result in ineffective or absent macrophages are fatal. On the other hand, you can have too much macrophage activation, and overactive macrophages have been tied to metabolic disorders such as type 2 diabetes.

Natural Killer cells (NK cells) have perhaps the coolest name of any immune cells, and their key advantage is making us all fondly recall Woody Harrelson and Juliette Lewis. Just kidding. NK cells play a critical role in defending the body against cancerous cells and virus-infected cells.

To understand how NK cells do this, let’s first step back again to macrophages and T cells. We said that macrophages present MHC class II complexes that T cells recognize much like a “lock and key.” There is a similar complex, called MHC class I, that is present on the surface of all cells throughout the body. In another post, we will discuss how MHC class I operates to trigger T cell killing of infected cells, but the important detail here is that many viruses try to escape T cell killing of their host cell by hiding MHC complexes. This means of escaping immune recognition would be very effective and likely deadly-- except that NK cells step in to save the day. Specifically, NK cells kill cells that don’t have any MHC class I complexes on their surfaces. This allows NK cells to identify and target cells that are not “self,” like bacteria, and also cells that are “self” but have been compromised, like virus-infected cells that have hidden their MHC class I complexes.

This killing is innate in that it doesn’t require previous activation or recognition of particular pathogens, and, as a result, NK cells are some of the first responders in many viral infections. During the first few days of an infection, NK cells lead the attack on infected cells, buying time for the adaptive immune system to expand pools of responding T cells and mount a response. 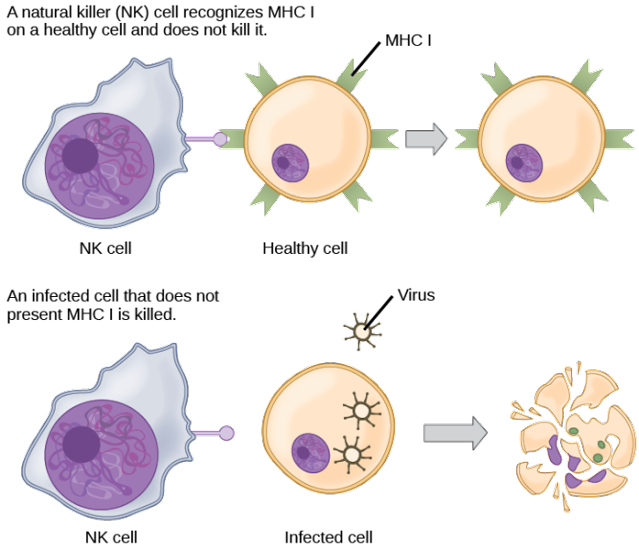 Macrophages and Natural Killer cells are just two of many types of innate immune cells that all play roles in maintaining a happy immune equilibrium. Monocytes, eosinophils, neutrophils, microglia-- the list goes on, and while we won’t cover those today, hopefully macrophages and NK cells give you a flavor for what innate immune cells do, and we can dig in deeper as we learn more.