In our last post, we learned about macrophages and NK cells, which are cells of the innate immune system that can respond to pathogens without having seen them before. In contrast, adaptive immune processes are those that develop in response to particular pathogens that the organism sees. There are many cells and systems involved in adaptive immunity, but just to give you a flavor, we will today highlight two of the cell types that play important roles in human adaptive immune responses: T cells and B cells.

There are a number of different varieties and subtypes of T cells, but they all have special receptors called T cell receptors (TCRs) on their surfaces. Unlike macrophages and other innate immune cells that have a set of receptors shared across all individual cells, T cells each have a unique version of the TCR. Each T cell’s TCR is in fact semi-randomly generated during the development of the cell, resulting in up to hundreds of millions of unique TCRs circulating in humans. The individual T cells replicate, so humans end up with populations of ~thousands of cells that each have a particular TCR. These bands of T cells with particular TCRs then circulate throughout the body, and as they go they survey the small protein fragments presented in the MHC complexes of innate immune cells and standard tissue cells. (You may recall from our last post that these protein fragments come from pathogens like viruses that have been processed and presented on the surface of cells.)

If a particular T cell’s particular TCR matches a protein fragment being presented by the other cells, the T cell in question starts to rapidly clone itself, resulting in more and more T cells with that particular TCR. These T cells become an army that is targeted at the protein fragment that caused the initial reaction, meaning that if a virus has infected cells in the body, there would be a growing number of T cells able to respond to that particular viral infection. If the infection is overcome, and cells stop presenting pieces of the virus, the responding T cells slowly die off, but they leave behind a larger population of “memory” T cells that are ready and waiting if the virus ever comes back. This is why T cells are considered part of the adaptive immune system; the fact that they have seen a particular pathogen makes them more able to respond to that pathogen in the future, leading to long-term immunity in many cases. 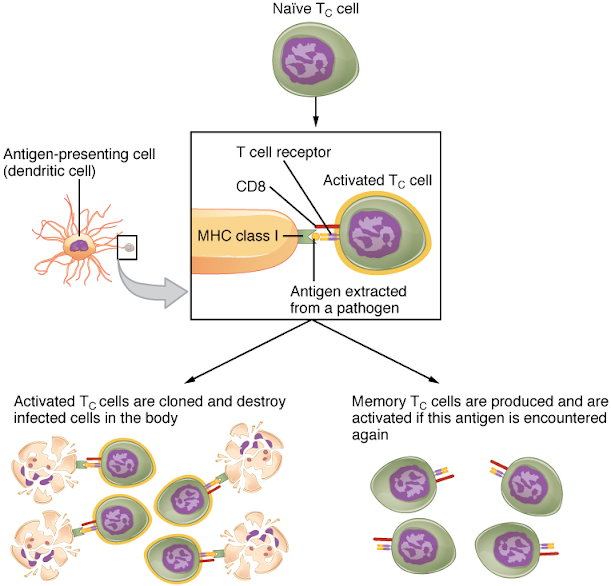 That’s the “how” of the T cell response, but the “what” is also interesting and diverse. There are many types of T cells, and they are typically categorized according to certain proteins that exist on the surfaces of the T cell in addition to the TCR itself. CD8 T cells (in other words, T cells that have a special protein called CD8 on their surface that we can see in studies) are often called “killer T cells.” When a CD8 T cell’s TCR recognizes a protein in the MHC class I complex of a tissue cell, the CD8 T cell kills the tissue cell in question. This is an important defensive mechanism; if the cell has been infected, it presents parts of the pathogen on its surface, and by killing that cell, the CD8 T cell is preventing the further replication and spread of the pathogen. In contrast, CD4 T cells (those with a special protein called CD4 on their surface) are often called “helper T cells.” These helper T cells monitor macrophages, dendritic cells, and other innate immune cells and start signaling cascades if they recognize the protein fragments being presented. These signaling cascades call other immune cells like CD8 T cells over to the site, and are therefore an important part of mustering a systemic immune response.

There are also memory T cells, regulatory T cells, and many more T cells types that we won’t go into detail here.

The “how” of B cells starts similarly to T cells. Like T cells, B cells have special receptors called B cell receptors (BCRs) that are semi-randomly generated. B cells, each carrying one of these diverse receptors, travel through the lymphatic system. Unlike T cells, the BCR doesn’t require the protein fragments it recognizes to be held in MHC complexes, and can bind the protein fragments either in MHC complexes or free-floating. Once the BCR recognizes a pathogen fragment, the B cell engulfs the fragment, processes it, and re-exposes it on its cell surface in its own MHC class II complex. CD4 T cells can then check the protein fragment with their TCRs. If the fragment is recognized by CD4 T cells, the T cells are activated (as discussed above), and so are the B cells themselves.

Once the B cell is activated by the co-binding of the T cell, it starts cloning itself, creating many copies of B cells with the pathogen-recognizing BCR. The clones, however, are not “naive,” and are already in a mature state. These mature B cells are called plasma cells, and they have a super power: they secrete antibodies, which are large proteins that bind to the same set of protein fragments as the cell’s BCR. 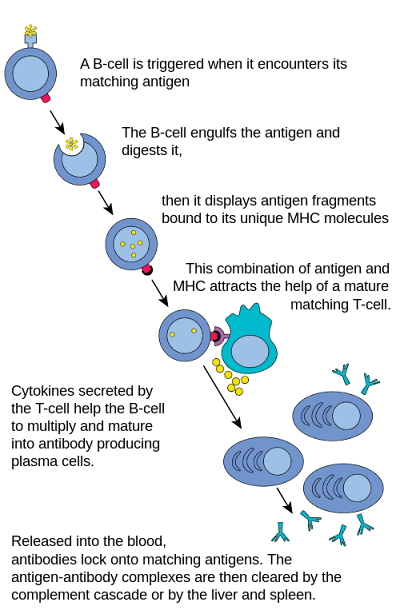 The antibodies that circulate throughout the body and perform a number of different defensive functions: they can bind directly to pathogens like viruses circulating through the body and neutralize the pathogens; they label the pathogen for uptake by macrophages and other cells in the innate immune system; and they can initiate the complement cascade, which is an innate immune process that kills bacteria by drilling holes into their cell membranes.

After the infection has been contained, like T cells, the large populations of antibody-producing B cells die off, but they leave behind memory B cells that are easily reactivated in the event of a second infection, resulting often in long-term immunity. Thus, through the activation of T cells and release of antibodies, B cells are a critical part of the adaptive immune response as well as lasting immunity to many pathogens. 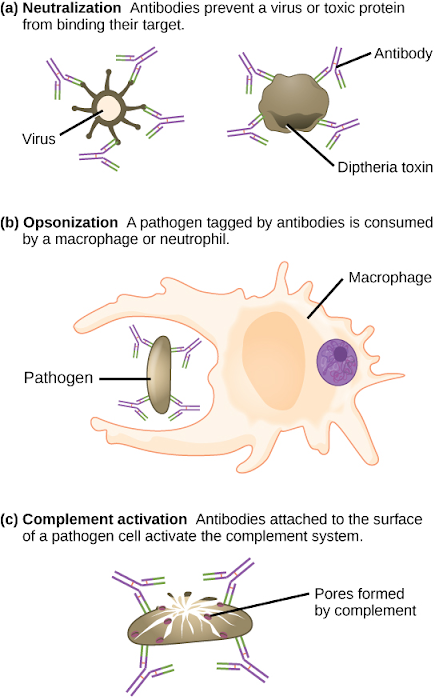