In the previous installments, we learned that a virus is a submicroscopic intracellular parasite that must rely on a host to replicate, and it does so by enclosing a nucleotide payload in a protein capsid. Today, we’ll learn more about the lipid envelopes and lipid-bound proteins that often surround the capsid.

While a viral capsid is robust and protective of the viral genome, a naked capsid has a fatal flaw: it’s stuck inside the host cell. Cell membranes are made of lipid bilayers with hydrophobic cores that prevent proteins from easily crossing in and out of cells, which means a virion (that is, a single viral capsid and contained genome) can’t just float out of the host cell once assembled.

Viruses have evolved several strategies for escaping the host cell so that they can infect the next host. (A reminder: viruses do not >plan< this evolution, and rather the viruses that survive are those that succeed in escaping, passing on their mechanism of escape to the next copy of the virus.) The simplest strategy-- and the one employed by most plant viruses and some bacterial and vertebrate viruses-- is to wait for the cell to die. As the defunct cell breaks apart, the viral particles are released and can infect the next cell. This, however, requires cell death for the virus to successfully spread, and that is often less effective at spreading the virus than keeping the host cell alive and producing more viral particles as long as possible.

So, viruses have evolved another strategy for escaping the lipid bilayer of cells that doesn’t require cell death: budding. Viral budding is the process by which viral particles collect at the host cell membrane, assemble into a capsid and genome (together, the nucleocapsid), and then push through the cell’s lipid membrane. In the process of pushing through the cell membrane, the nucleocapsid takes some membrane-forming lipids from the cell, resulting in a lipid envelope that fully wraps the virus and allows it to escape the cell. 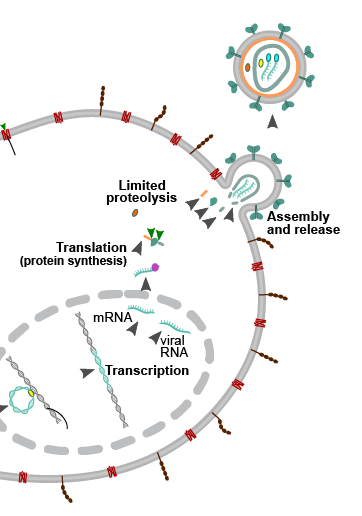 The challenge with a lipid envelope, however, is that now the virus has a membrane just like any other cell, and cells are happy to bounce around each other in self-contained lipid membranes. In other words, a virion in a lipid membrane borrowed from the host cell is quarantined and inert; it looks like an arbitrary cell, but can’t get into other cells to continue the replication process.

So, viruses have evolved a mechanism for getting into the next cell and starting the whole replication and release cycle over: surface glycoproteins. A glycoprotein is a protein (that is, an amino acid chain) with carbohydrate molecules attached. Glycoproteins are used throughout biological systems for signaling, regulating development, and any number of other important cellular activities. Certain glycoproteins have the nice property that they can insert into lipid membranes and remain anchored there, creating a protein protrusion on the cell membrane that can transmit signals from outside the cell in. 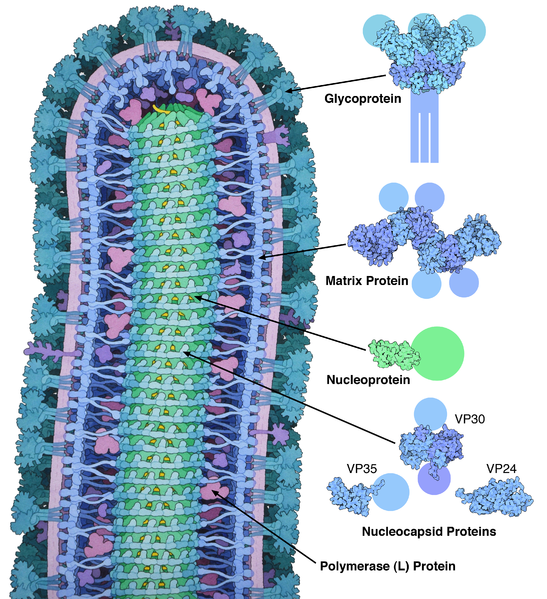 Many viruses have leveraged this system to evolve their own glycoproteins. The protein component is encoded in the viral genome just like the capsid proteins are, and it is thus transcribed and assembled inside the host cell. The viral proteins then pick up carbohydrate groups (a process called glycosylation) from the host, and insert themselves into the host cell’s lipid membrane. Now, these are just modified proteins, so they don’t do so with intent, but rather happen to anchor to the membrane due to hydrophobic and electrostatic forces at the molecular level.

(You might be wondering: there’s a genome, a capsid, a lipid envelope, glycoproteins-- and this all comes together through natural molecular forces? How can it be that the virus particles select the correct components each time? The short answer is-- they don’t, and many viruses produce thousands of non-infectious particles for every successful virus. Some viruses have evolved signalling mechanisms that enable better-than-random assembly, like special packaging signals encoded in the viral genome, but even then, the process often prefers quantity over quality, resulting in a very high ratio of generated particles to effective viruses.)


As the viral nucleocapsid buds through the cell membrane, the lipid envelope that it extrudes contains the virus’s embedded glycoproteins. In other words, instead of an inert lipid envelope, viruses usually have lipid envelopes with embedded proteins that can signal to other cells and leverage the host’s intercellular processing to get back inside of cells. For example, many viral proteins bind to particular receptors on the outside of host cells, and the act of binding to these receptors causes a new host cell to internalize the bound particle. Once inside the cell, the virus can dump its nucleotide payload and begin the whole replication cycle again. Thus, lipid membranes with surface glycoproteins are an essential mechanism by which viruses can increase the scope and rate of infection without killing host cells.

The end of the beginning

Now we’ve gone through the basic components of a virus: a genome, a capsid, a lipid envelope, and surface glycoproteins. This is only just the beginning, though, and you're probably already thinking of a million questions-- what about coronaviruses? How do viruses get in cells in the first place? Why are they so deadly? I will explore further in subsequent posts, so subscribe now to learn with me.